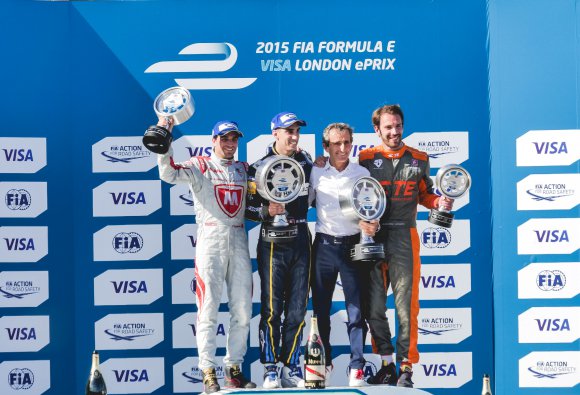 The inaugural FIA Formula E Championship concluded in style, with e.dams-Renault clinching the Teams’ title after Race 1 on Saturday, June 27, thanks to the lights-to-flag victory of pole-winner Sébastien Buemi. The Swiss driver’s points haul of 28 points closed the gap to leader Nelson Piquet Jr to just five units ahead of Sunday’s action. That boosted his confidence, which was lifted further when Buemi got a dry qualifying slot (Q2) for Race 2, while title rival Piquet was slowed by a heavy shower during Q3.

For the first time this season, the drivers faced wet conditions but the MICHELIN Pilot Sport EV rose to the occasion to provide the necessary grip. “We’ve been waiting for this sort of weather since the beginning on the championship,” says Serge Grisin, manager of Michelin’s Formula E programme. “We designed the MICHELIN Pilot Sport EV to be a very versatile tyre and we finally got the opportunity to see how it performed in a wet qualifying session on Sunday. Technically, that was very important because we wanted to collect data and get feedback from all the drivers. Now we know we met our objective because we received positive praise from everyone.” 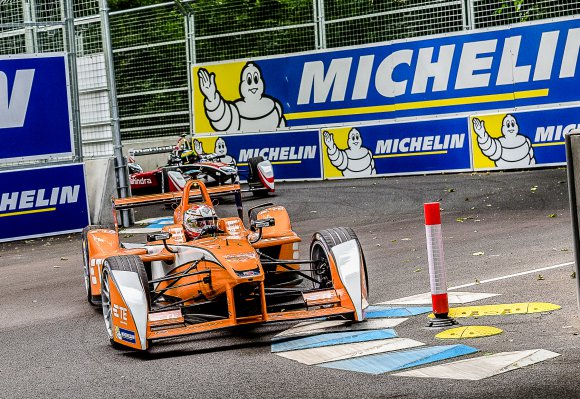 The wet session shook up the start order for Race 2, with Stéphane Sarrazin (Venturi) claiming pole position and title challengers Buemi and Piquet starting from sixth and 16th places on the grid respectively. Forty minutes later, after one of the season’s most exciting contests, the Swiss driver and the Brazilian collected fifth and seventh places overall. That was enough for Piquet (144 points) to seal the Drivers’ crown by a single point. The race itself was won by Sam Bird (Virgin Racing), ahead of Jérôme D’Ambrosio who claimed his second strong result of the weekend.

“Congratulations to e.dams-Renault and Nelson Piquet Jr on their historic titles, with Michelin,” said Michelin Motorsport Director Pascal Couasnon. “It’s been a very positive first season of Formula E, both for the championship and for Michelin. The spectacle that the organisers, teams and drivers and our tyres delivered to the public was of a very high standard. We are very much looking forward to next season when the cars will benefit from significant technological evolutions, especially with regard to their drivetrain. It is through innovation that Formula E will assert itself as a laboratory working for tomorrow’s mobility.”

“These Michelin tyres have been amazing all season. The first time I saw them at Donington last summer, I thought they were rain tyres and that they would move around too much because of their tread pattern. When I tested them, I realised that Michelin had come up with something different to what I had ever experienced before. They delivered a very high level of performance and efficiency for these fast, innovative cars despite the weight of the batteries.

“Over the season, we came across all sorts of slippery, inconsistent types of surface but we could always count on our tyres. What surprised me most was that even under heavy braking, even when I locked my wheels, I never felt any vibrations through the steering. Here at Battersea Park, they performed flawlessly despite the huge constraints they had to cope with. The contact patch is very small, so racing drivers need to know they can depend on their tyres. I was certainly able to count on these Formula E Michelins!”