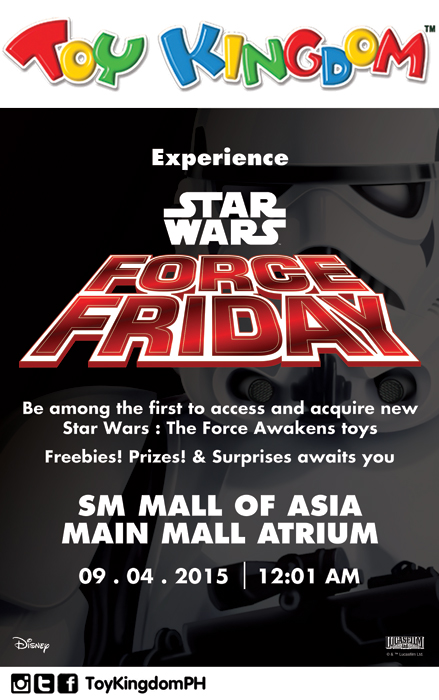 Star Wars fans across the world will soon get a first look at select new products inspired by the upcoming film Star Wars: The Force Awakens as the world’s first live, global toy unboxing event unfolds across 12 countries, 15 cities, and 18 hours.

In the most epic product launch ever mounted, select toys and merchandise inspired by the upcoming film Star Wars: The Force Awakens will be revealed for the first time in Youtube.  The celebration will be hosted out of Los Angeles, with live unboxings beginning in Sydney, Australia (evening of Sept 2, US time), and the grand finale at Lucasfilm, home of Star Wars in San Francisco (morning of Sept 3, US time)

In the Philippines, select Star Wars: The Force Awakens toys and merchandise will be celebrated in a Force Friday event on September 4 at 12:01 am at the SM Mall of Asia’s Main Mall Atrium.

Aside from getting the first dibs, Star Wars enthusiasts will be amazed at the exciting line up of events such as best dressed impersonator competition and Star Wars trivia with prizes to be won. Freebies also await lucky shoppers.

Save the date, join this epic launch, and be the first to have never before seen products inspired by the movie at the Star Wars: The Force Awakens toy launch only at Toy Kingdom.